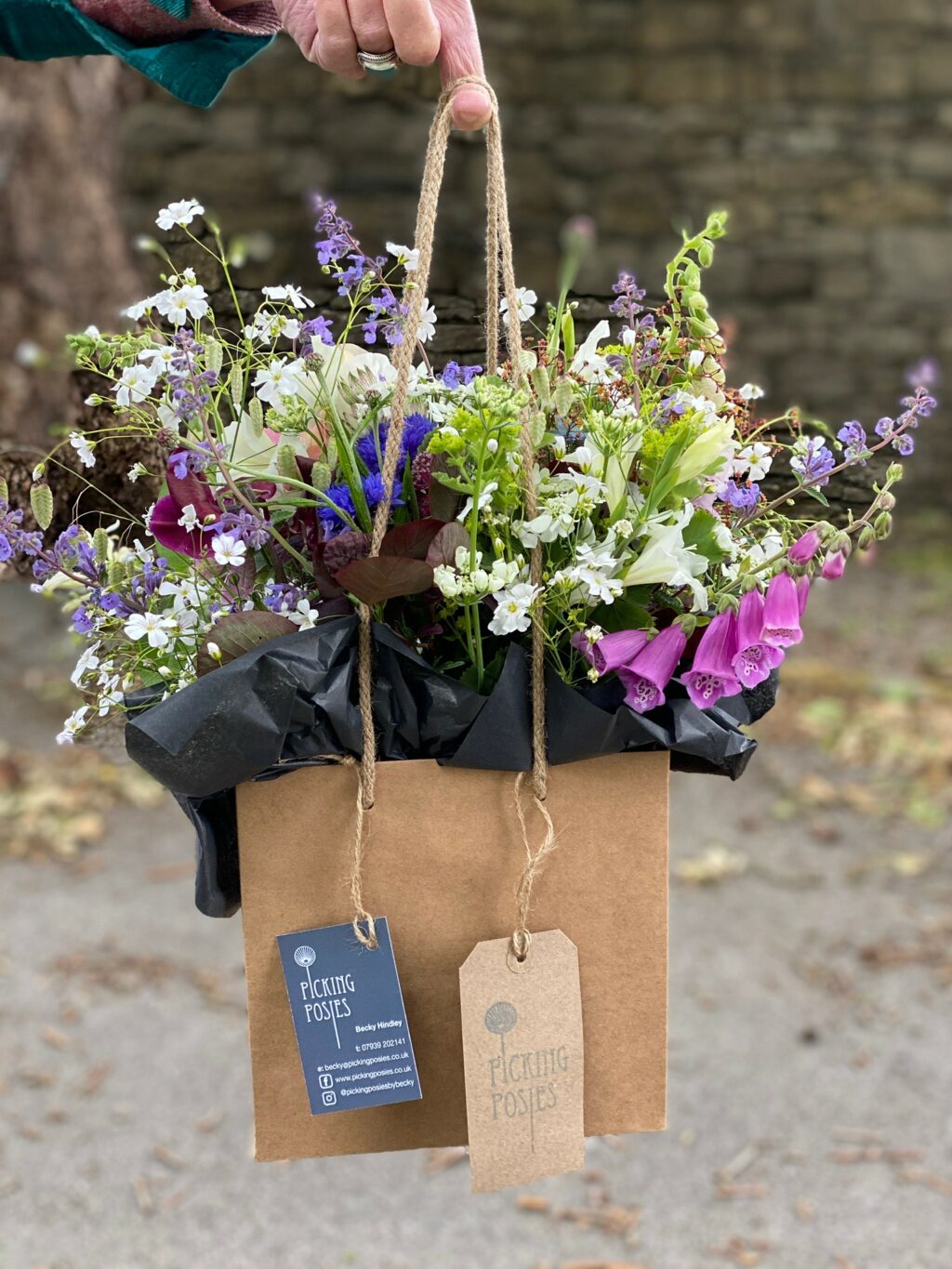 The carbon footprint of flowers

Rebecca Swinn compares the carbon credentials of British grown and imported bouquets in this summary of her dissertation findings by Angela Coulton, Petal and Twig.

The sustainability of cut flowers rarely receives the media attention given to other retail produce despite their much higher carbon intensity. In her MSc dissertation Rebecca Swinn uses Life Cycle Analysis (LCA), a popular tool for assessing the environmental impacts of products and processes, from raw material acquisition to production and use stages, to compare the equivalent carbon emissions from cultivation and transportation of seven cut flowers available at UK retailers. Under a broader umbrella of ‘sustainability’, Rebecca’s thesis also addresses water and fertiliser use and labour conditions – pertinent issues in cut flower cultivation. This is the first study to compare a bouquet of flowers sourced from different countries, and grown under different conditions (outdoor vs greenhouse) rather than individual stems of flowers. It has previously been difficult to compare the carbon footprint of British flowers with imported flowers due to lack of data on British flowers and difficulties in finding varieties of flowers that are grown in the UK, Holland and Kenya.

Using the functional unit of kgCO2e/stem, emissions are found to be highest for Dutch lilies, followed by Kenyan gypsophila, Dutch roses and Kenyan roses. Emissions are significantly lower for lilies, snapdragons and alstromeria produced by commercial-scale and small-scale flower growers in the UK. Emission hotspots are transport, heating and electricity use. An imported mixed bouquet produces 10x greater than a British-grown mixed bouquet.

Understanding of key environmental issues surrounding the flower trade differs considerably among supermarkets, packing companies, florists and consumers and the impact of accreditation is unclear. Pressure from buyers and supermarkets has increased environmental and ethical standards in Kenyan floriculture, though concerns remain over labour conditions and fair access to water resources. For consumers, emission savings are greatest through purchasing British-grown bouquets and stems with longer a longer vase life

The unit for comparison is a medium price bouquet, which might be composed of roses, lilies and gyspophila in a supermarket or high street florist, and also allows comparison with a mixed bouquet of British flowers to the same value.

The study allows the concept of substitution of lower carbon alternatives to be pursued, rather than simply comparing roses or lilies from different sources, which may be of little relevance to small scale British flower growers such as members of Flowers from the Farm (FFTF), who deliberately grow varieties different to those offered by supermarkets or high street florists. Substitution is now common in considering the climate impact of different diets, for example, and it seems appropriate to take this approach to flowers.

This is a small but academically rigorous study which has investigated the lifecycle of British grown flowers through engagement of several FFTF members in the NW, plus Smith and Munson in Lincolnshire and Crosslands Nursery. The author has had access to both published academic literature and databases compiled by Mike Berners-Lee at Lancaster University for the purposes of calculating the CO2emissions embedded in the production, supply chains and use of everyday products. (See Mike’s book “How Bad are Bananas? The carbon footprint of everything”). 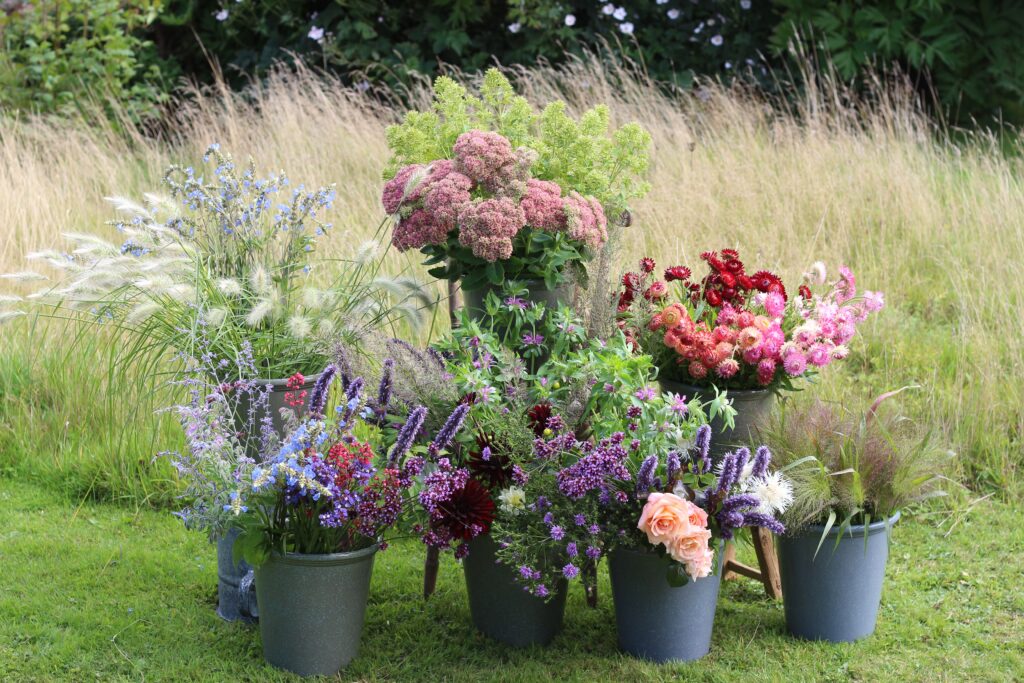 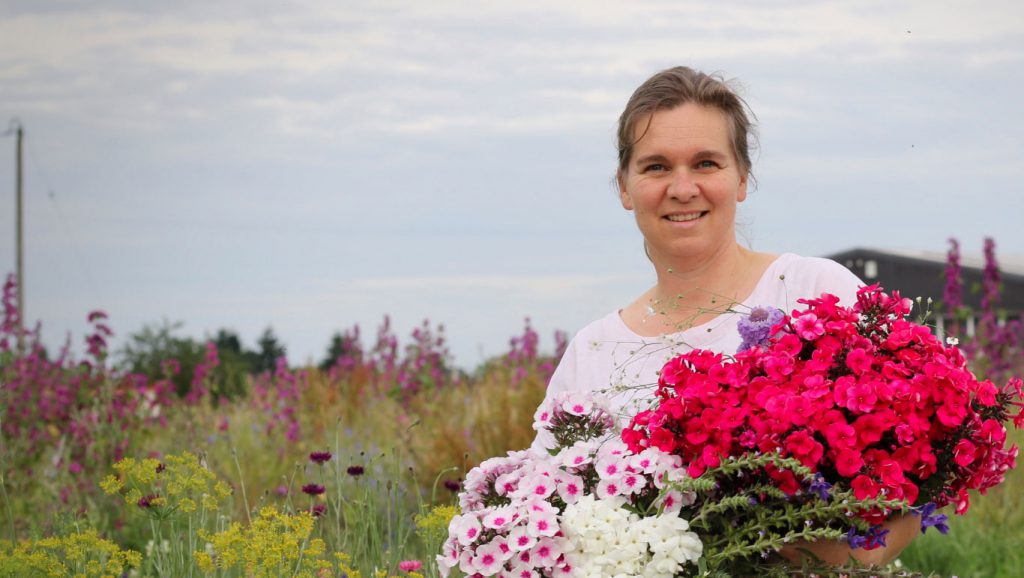 To every flower, a season. Meg of Roots Family Farm in her summer flower field. 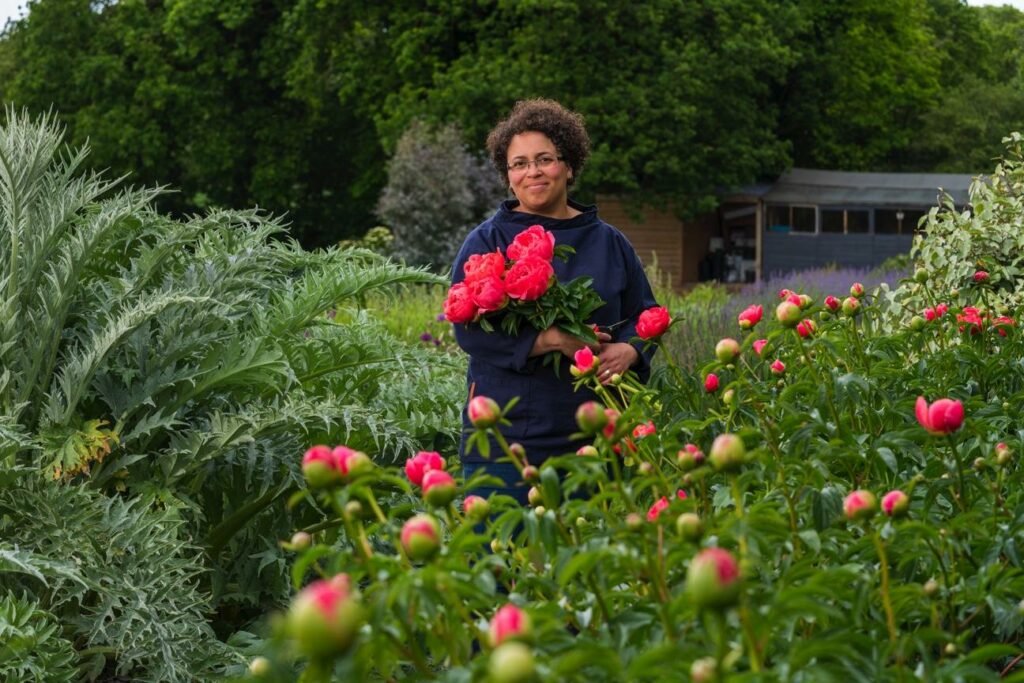 The results would seem to support claims that British grown flowers have a much lower carbon footprint than any other flowers.

Generally, the emissions saved by growing outdoors in Kenya are cancelled out by fertiliser use and air freight emissions, and the Dutch greenhouse grown flowers remain high CO2due to highly automated systems and relatively inefficient heating and lighting, plus several hundred miles transport.

Rebecca’s study did not have direct access to the composition of supermarket bouquets, just photographs and possibly mistakenly assumed that one flower head=1 stem. This resulted in stems of lilies being miscounted as 3 stems, rather than 3 open flowerheads on one stem. The bouquet emissions have therefore been recalculated as follows:

Whilst there is little difference between the Dutch and Kenyan grown bouquets, and there appears to be some truth to the claim often made that Kenyan roses have a lower carbon footprint than Dutch. However, the carbon footprint of the British flowers option using commercially grown lilies and alstromeria is approximately 10% of either.

A locally outdoor grown bouquet of mixed garden flowers is estimated to have even lower CO2emissions, around 5% of the Dutch or Kenyan bouquet.

Cut flowers shouldn’t cost the earth. British flowers are simply sensational and they’re also good for the planet. Read more about their beauty and benefits here in our handy resources.

Flowers grown on an artisan scale have a delicate beauty as well as stunning scent. Find out why buying locally grown flowers brings benefits to the environment as well as to your vase.

Get inspired by our specially curated gallery of images of members’ flowers, plots and arrangements – constantly changing to reflect the current season. 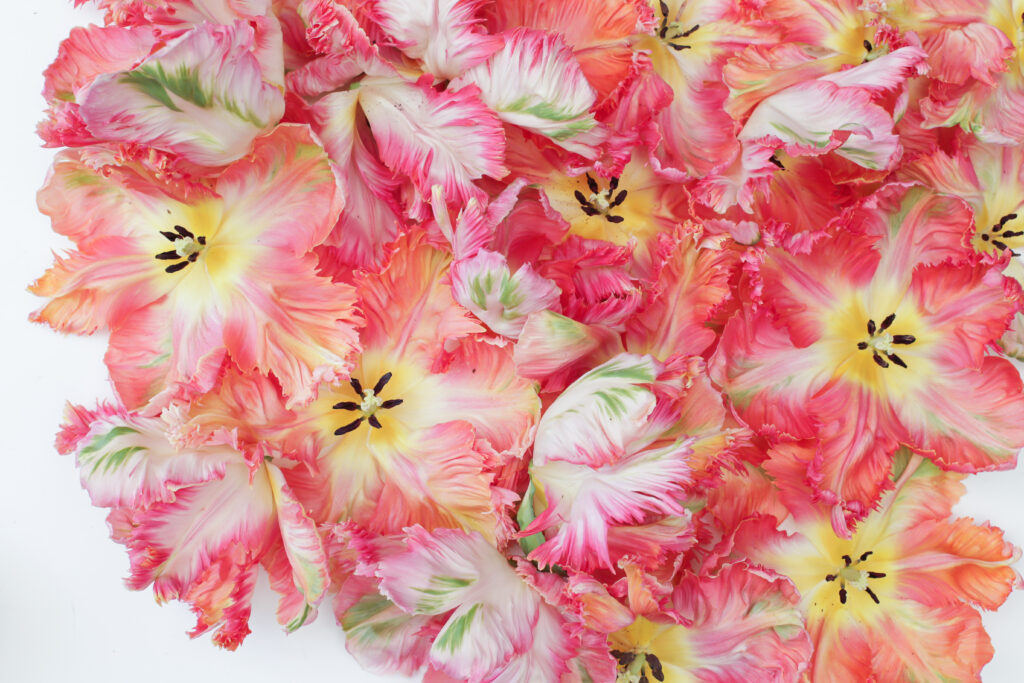 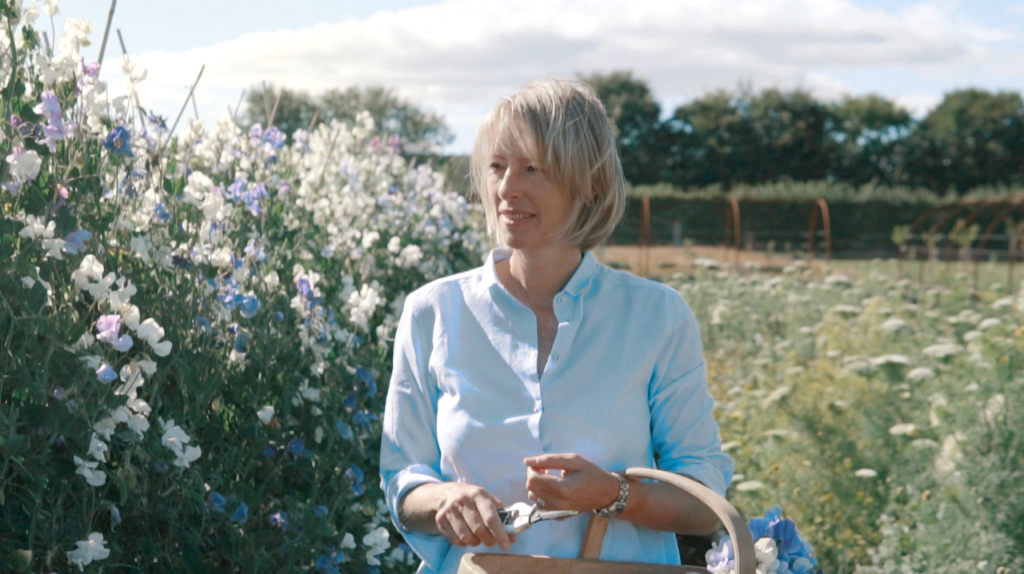 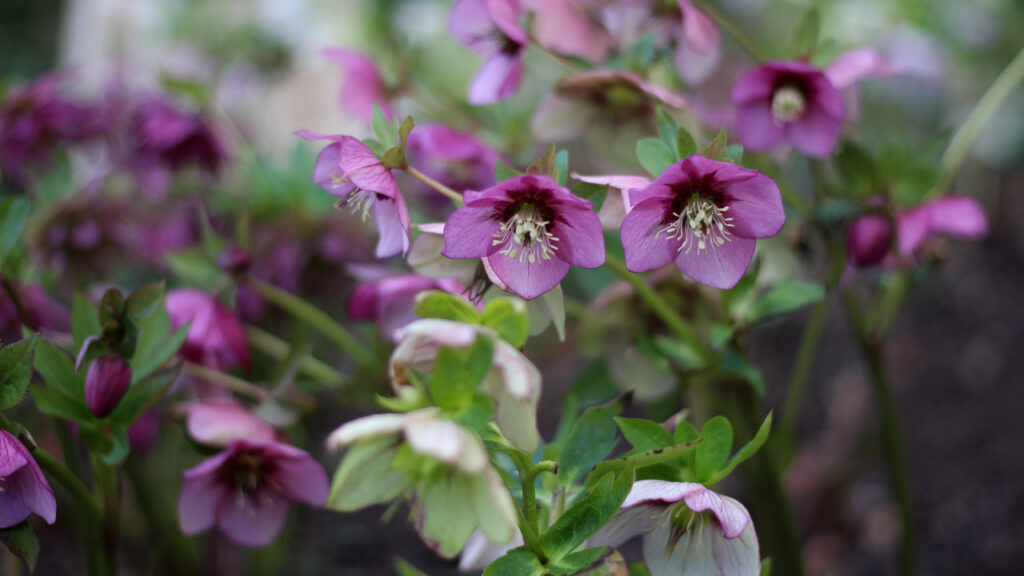