Jo Thompson, who runs Wye Valley Flowers in Gloucestershire with her business partner Lucy Shoubridge, is a case in point of the environmental ethos behind British flower farming. She describes the impressive programme of  wildlife enchantment she has overseen on location in the Forest of Dean, and how flower growing can – indeed must – be made part of a rich and healthy landscape. 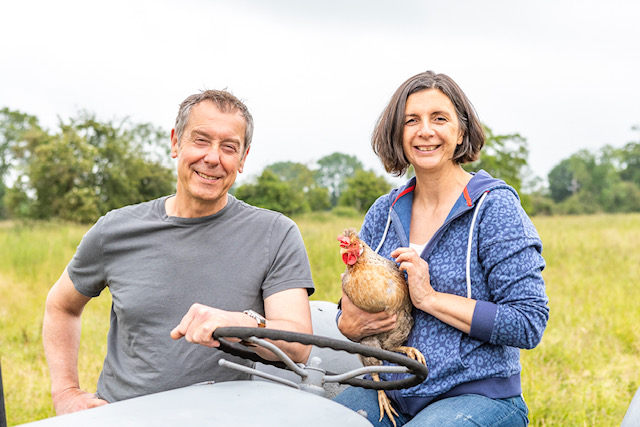 The site on which Lucy and I run Wye Valley Flowers is 13 acres in total, with less than 1 acre currently given over to flower growing. When we started here, the whole area had been badly over-grazed, and much of its hedging was ripped out in the 1980s. It was and still is a mess, but we are slowly turning it into something more carefully managed and diverse. It now hosts tenanted grazing sheep, a resident fencer, and my own glamping business alongside the flower field. We hope to extend the flowers into the surrounding farmland over the next 3-5 years, so any conservation projects we undertake have to bear this in mind.

We have put a range of wildlife and biodiversity enhancement measures in place in recent years. Some were part of a planning application for the flower studio and glamping, but the rest were the result of a meadow survey we commissioned which described the land around the flower farm as ‘species poor’ – a depressing start. The former was expensive but the latter was free when we joined our local meadow society. 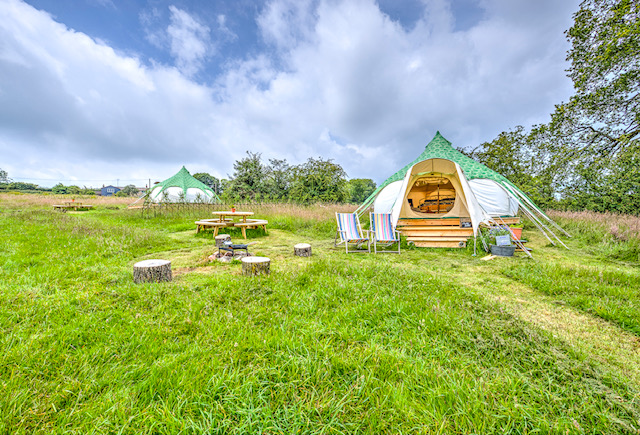 Jo’s glamping business is nestled in the rougher landscape of the surrounding farmland.

We also joined various nature charities during lockdown (to keep my daughter occupied outside!) which had a wealth of information on creating and maintaining habitats – Bat Conservation, Friends of the Earth, Bees for Development, Woodland Trust and the Wildlife Trust were particularly useful. In fact their websites contain as much information as you are likely to need, including plans for making bird boxes, and your local bee-keepers Facebook group will also be a great point of contact.

We added numerous bird boxes onto the farm buildings, sited on different aspects of adjoining buildings for different types of birds. Some need a ‘fly in’ cup high up in the eaves, while others need a sociable ‘terrace’ of boxes. Again, the RSPB website was incredibly helpful with planning this, and their online shop was as reasonable as anywhere else.

On some mature oak trees further out we installed three small ‘Beamaris Woodstone’ bat boxes. These too were placed on different aspects, as bats will move around to avoid the heat of the day in summer.

We are lucky enough to have a hedgehog hospital next door, and they commissioned and installed 3 shelters on undisturbed areas around the flower farm boundary, using us as a site of ‘last resort soft release’ for hedgehogs that were vulnerable or unable to return to their home. There is evidence the shelters had been used again over winter this year, and we’ve noticed a marked improvement in our slug control. The British Hedgehog Preservation website has useful information about feeding and when NOT to move a hedgehog. 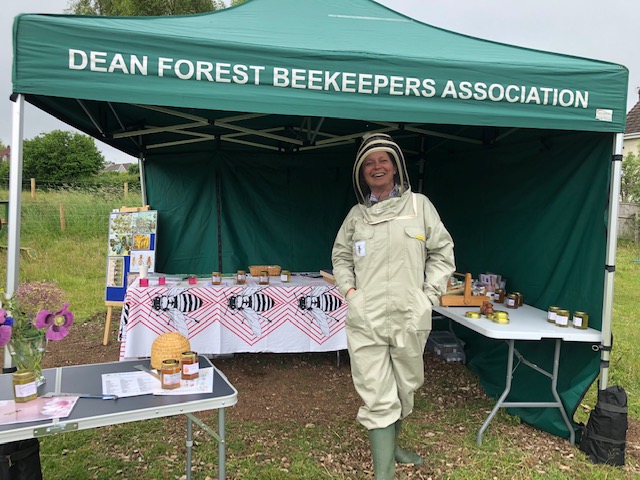 All the conservation work at Wye Valley Flowers builds relationships with a local community of experts, volunteers and organisations.

We have planted an orchard of 20+ specimen fruit trees, including plum, cherry, pear and apple, and created stick and log piles nearby, as well as leaving some areas of bramble cover. Truth be told, the logs got left behind after trees were felled because of ash die back, and the brambles never got flayed – but these areas will now be left alone, as they offer a different kind of habitat to the rest of the field.

We have gapped up the old hedges with native species and created some new hedging – using oak, hawthorn, dogwood, dog rose, elder, hazel, willow, rowan, alder, beech, and silver birch. We put a call out offering burgers in exchange for a couple of hours work, and have had 107 volunteers help out at 6 planting events. I think tree planting really speaks to everyone, and not everyone has the space to do it on their own land. We used ribbons on trees that the kids planted, so they can come back and ‘visit’ them.

We have 6 springs on our land, and in time we’ll install a borehole to use for irrigation. This year, when the land dries out from May onwards, we are going to dig a large stepped pool below our existing reed beds, to create a water source for bees, other insects, nesting birds and visiting mammals – as well as hopefully improving natural pest control in our flower field into the bargain.

Finally, we have a large (1m square) bug hotel made out of several pallets (they always seem to be lying around the farm), which we invited the local school to fill with wool, dog hair, fur cones, bamboo sticks, tiles, drilled logs, cardboard and bricks. Getting the community involved has been helpful to us on multiple levels, not just for very welcome labour but giving us an opportunity to explain what we are doing and potentially meet new audiences.

We now have nesting snipe across the field, as well as more meadow flowers than just 3 years ago. The hedgehog population is thriving, and there is increased nesting activity along the hedges. We have also observed newts and toads, which weren’t in evidence before. The young hedgerows are really starting to fill out, and will more or less look after themselves from now on. We are so looking forward to the blossom, harvests and enrichment of our site in years to come. 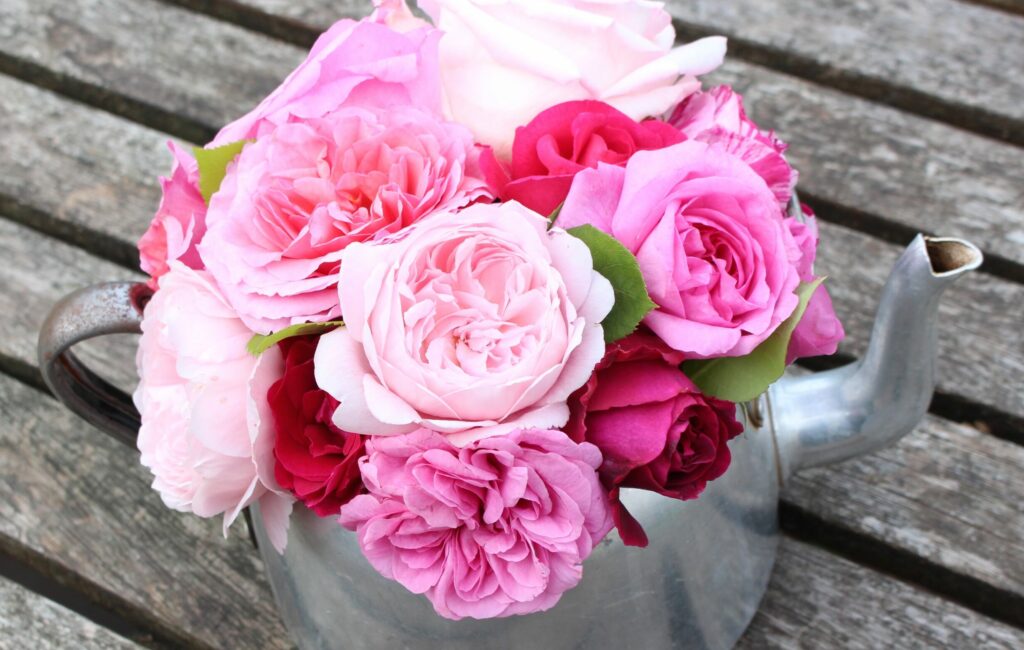 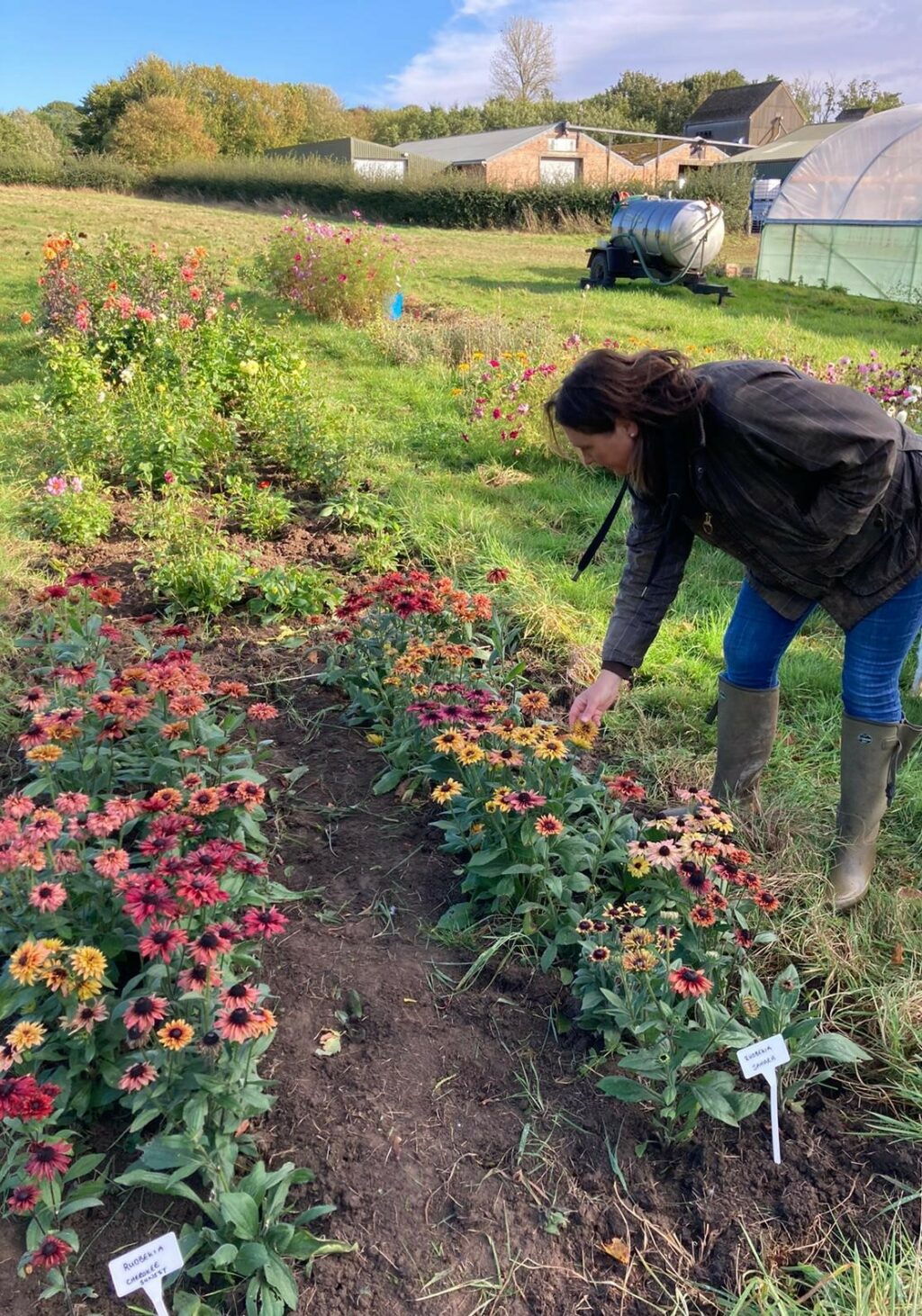 Rudbeckias go out with a bang
Read more